Cranial nerves are the 12 nerve pairs that emerge directly from the holes at the bottom of the skull without passing through the skull. These nerves are responsible for connecting the brain to different body parts such as organs, muscles, motors and sensory organs. These nerves are located in the lower part of the brain and also extend over to other areas outside the brain such as the neck and thorax. They are a part of the peripheral nervous system and relate the cervical and cranial structures of the brain in an afferent direction and the vegetative, sensorial, motor and sensory structures in an efferent direction. 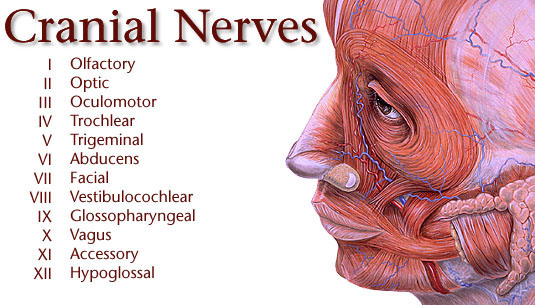 These are sensory nerves responsible for collecting the olfactory stimuli form the nose and carrying it to the human brain. They originate from olfactory bulb cells and are the shortest of all the cranial nerves.

Optic nerves collect visual signals from the eyes and carry it to the human brain. They are composed of the ganglion cell axons in the retina. These nerves take the visual stimuli from the photoreceptors and transfer them to the human brain and emerge in the area known as diencephalon.

These are also referred to as common ocular motor nerve and are responsible for controlling the movement of the eyes and modulating the size of the pupils in different light conditions. These nerves have their origin in the middle section of the human brain.

Trochlear nerves have both the somatic and motor functions. They are connected to the superior oblique muscles of the eye and take control of the movement and rotation of the eyeballs. They originate from the mesencephalon and also oculomotor nerve.

Trigeminal happens to be a mixed cranial nerve consisting of the motor, sensory and sensitive nerves. It is the biggest of all the cranial nerves. The main function of the trigeminal nerve is to transmit vital signals to the facial muscles and convey sensations such as pain, temperature, and touch from the face, mouth and the meninges.

Abducent also goes by the name of external ocular motor cranial nerve. It is a motor nerve and is responsible for carrying the signals to the extraocular muscles in the eyes which makes the lateral movements of the eyes possible.

This is a mixed nerve consisting of several different nerve fibers and is responsible for functions such as creating facial movements and sending stimuli to the lacrimal and salivary glands. It also collects the information of taste form the tongue.

The vestibule cochlear happens to be a sensory nerve. It also goes by the names vestibular and auditory nerves. These nerves help in marinating the orientation and balance in space through the auditory functions.

These are nerves that collect the impulses from the various taste buds and the pharynx. Their influences lie mainly in the pharynx and the tongue. It also gives orders to various neck muscles and the salivary glands and assists in the process of swallowing. They also help in monitoring the blood pressure.

The X-vagus or the pneumogastric has its origin in the medulla oblongata which then traverses the esophagus, trachea, larynx, pharynx, heart, stomach, bronchi and liver. They have their influence in the process of swallowing and in sending signals to the autonomous system. These nerves have a special role in controlling stress and regulating the state of activation by sending direct signals to the sympathetic system.

The accessory or the spinal nerve acts as a motor nerve. It supplies the trapezius and sternocleidomastoid muscles and is responsible for governing the head and shoulder movements. This is also the same nerve that gets used when we throw back our heads. Therefore, it mainly has its involvement in the shoulders and head.

The hypoglossal nerve functions like a motor nerve and is responsible for functions such as swallowing, speech, and muscles.

Things can get very stressful, especially when you have a lot to cover within a very short span of time. You may have wasted a lot of time trying to memorize the names and types of cranial nerves but with little success. Using mnemonics can make it very easy for you. You will be able to memorize much faster than anticipated and also retain it for a long time afterward. Given below are a few mnemonics for the cranial nerves that will help you memorize like a boss.

On old Olympus towering top a Fin and German viewed some hops.

On Occasion Our Trusty Truck Acts Funny, Very Good Vehicle Any How

Oh Once One Takes The Anatomy Final Very Good Vacations Are Heavenly.

Oh, Oh, Oh, To Touch And Feel A Guy’s Vein And Hotdog

Mnemonics Based on Nerve Types

In the following mnemonics, S, M and B stand for sensory, motor and both respectively.

Some Say Money Matters, But My Brother Says Bakes Brownies Matter Most’.

’Some Say Marry Money, But My Brother Says Big Brains Matter Most’

Some Say Money Matters, But My Beloved Says Being Beloved Matters More.”

These are the most popular mnemonics used for memorizing the names and types of cranial nerves. With these, you will be able to memorize in just a few minutes, or you can also get creative and come up with your own mnemonics.