Krukenberg tumors are mostly seen in women suffering from gastric cancer. It is thought to be a late-stage disease. Since the prognosis for krukenberg cancer is still not well developed, it does not have any optimal treatment at present. It is not yet known if a resectioning of the ovarian metastases through surgery can be helpful in improving the condition of the disease. However, a few cases that studied the impact of metastasectomy on krukenberg tumors originating from the stomach came to a conclusion that a resectioning of the ovarian metastases could indeed be helpful in prolonging the life expectancy of the patient. Despite this, the impact of performing an ovarian metastasectomy upon the disease is still debatable, and it is believed that not all groups of patients benefit from the procedure. 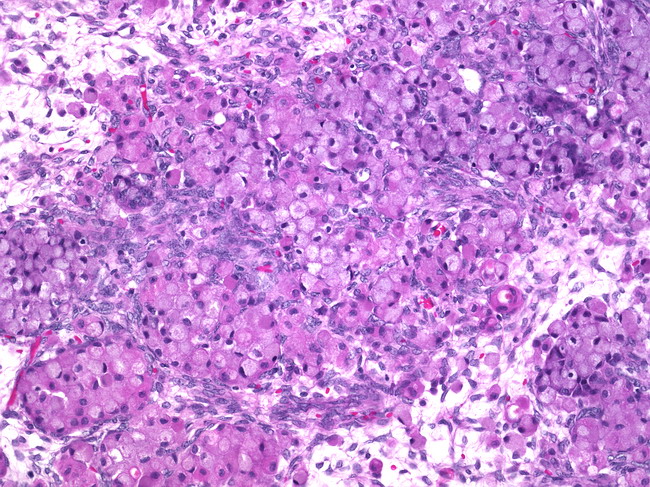 There is also evidence that suggests that ovarian metastasectomy can only be helpful if all of the residual diseases have been sufficiently eradicated and still a few other studies that correlate the procedure with a better chance at survival. However, it should be noted that a lot of the studies used very small samples and included patients suffering from breast as well as colon cancer while the evaluation for all was done without any discrimination.

What is krukenberg Tumor?

Krukenberg Tumors are malignancy occurring in the ovaries. It gets its name from Friedrich Krukenberg, who was one of the first to make a study on krukenberg tumors among young women with uneven and knobbly ovary surfaces, ascites and an involvement of the lymphocytes.  The ovarian krukenberg tumors usually metastasize from a primary site such as the gastrointestinal tract. However, they can also occur in other areas such as the breast tissues. The most common source for Krukenberg is gastric adenocarcinoma, mainly at the pylorus. Over 80% of the krukenberg tumors are found in the ovaries and have a consistency with their metastatic nature.

Krukenberg tumors were first studied by and named after Friedrich Ernst Krukenberg (1871 – 1946). In 1896, he was the first to report the primary malignancy in the ovaries. Six years after this, it was known that these ovarian malignancies had their origin in the metastatic gastrointestinal tract.

Although krukenberg tumor can occur in people of all age groups, the average age is fixed at 45 years. In most cases, the cancer starts from the ovary itself while in few cases accounting for 1 to 2% of the total, the cancer metastasizes into the ovary. However, Japan may be an exception as more than 20% of the ovarian malignancies are due to gastric cancer. Almost 15 % of the metastatic cancers arising from the ovaries are krukenberg tumors. They are less common as compared to the metastasis resulting from the germ cell tumors and ovarian epithelial tumors. Among the ones who have non-gynecologic malignancy, almost 20% cases are malignant while 60% are krukenberg tumors.

The exact mechanism during the tumor cell metastasis from the appendix, colon or the stomach to the ovaries is not clear. Initially, it was thought that the condition resulted from a direct seeding of the tumor through the abdominal cavity. However, it is more likely for the tumor to spread through the lymphocytes. It is thought that the relative increase in the vascularity of the ovaries with age could be one of the factors determining the average age for the diagnosis of the tumor.

When seen at a microscopic level, these tumors are congregations of signet ring cells in the ovarian tissues that secrete mucin. These signet ring cells are found whenever a diagnosis of the primary tumor is made. However, it is also possible for the other microscopic features to be present at the same time. In most cases, the Krukenberg tumors are metastases arising from gastric cancer or adenocarcinoma, and breast cancers are more likely to be metastases of invasive lobular breast carcinoma. However, the krukenberg tumors can also arise in other areas such as the pancreas, biliary tract, gall bladder, uterine cervix, small intestine, colon, appendix, urinary bladder, rectum or the ampulla of Vater. If applied with discretion, immunohistochemistry may be helpful in the diagnosis of krukenberg tumors arising out of primary ovarian neoplasms.

The most common causes of krukenberg tumors are:

Signs and Symptoms of Krukenberg Tumors

The most common symptoms of krukenberg tumors are

These tumors can also sometimes trigger a reaction in the ovarian stroma leading to a secretion of the hormone that causes hirsutism, virilization or a change in the regular menstrual cycle and causes vaginal bleeding. It should be noted that all of the symptoms that have been mentioned here are not specific to krukenberg tumors and can also be seen with many other issues apart from cancer. Diagnosis is usually made after confirmatory investigations that include laparotomy, biopsy, and computed tomography or CT scans.

The ovarian tumors that enlarge uniformly without undergoing any distortion and are characterized by the alterations in the fibrous areas in the mucinous cell groups and tend to spread through the lymphatics are known as krukenberg tumors. Such tumors are most common in women above the age of 35 years. In most cases, they are bilateral and influence a general increase in the size of the ovary. Due to this, it is capable of retaining the original form and do not contain any adhesions. They take very little time to metastasize and are likely to be fatal.

It is believed that krukenberg tumors are always a secondary result of cancer that has arisen somewhere else in the body. It is thought that these tumors may actually be more frequent than they are supposed to be. This is mainly because krukenberg tumors are very difficult to spot and only diagnosed during operations. Sometimes, it may be difficult to spot them even after the operation. Solid krukenberg tumors can be removed through operation. However, a recurrence of the tumor and its metastasis can still lead to the death of the patient. In general, it can be very difficult to diagnose these tumors, which is why a large part of the disease still needs to be studied upon. The prognosis for Krukenberg tumor is very poor and a lot of researches need to be undertaken in order to come to a strong conclusion.

There also appears to be disproportion in the extent and size of the tumor and its metastasis. In most cases, the gastrointestinal tract may appear negative, and the small suspicious area is found only upon a detailed search, and the diagnosis can be made through a microscopic section.

When a study was made with 128 subjects, the median age for the diagnosis was found to be 48 years. The primary tumors were most commonly located in the stomach and colorectum. They were also seen to be more common among the premenopausal women as compared to postmenopausal women. Furthermore, out of the 128 subjects who were taken for the study, it was found that 92 of them had metachronous ovarian metastasis.

The treatments include chemotherapy as well as metastasectomy. Of the 128 patients, 114 were given metastasectomy while the remaining 14 patients were exempted from surgery because of the metastatic lesions and 89 of the patients were also given chemotherapy. The surgery included bilateral and unilateral adnexectomy as well as bilateral adnexectomy with hysterectomy. The drugs that were used include carboplatin, oxaliplatin, cisplatin, 5- fluorouracil and oxaliplatin. A large number of the patients were also given a combination of 2 to 3 drugs in about 5 cycles.

It was seen that a large number of cases had bilateral ovarian involvement. The median size of the ovaries was 9.6 % out of which, 58.60% of the size, that is more than 10 cm was tumor. Out of the 128, 63 patients had ascites while 65 did not exhibit any signs of ascites. 71 patients had metastasis in the ovary while 57 patients had a combination metastasis in areas surrounding the ovary, such as bone, lung, pelvis and also other distant organs.

The fact that krukenberg tumors are of the secondary nature makes it difficult to come up with quick and effective management. The first step towards the treatment consists of correctly identifying the main source of the tumor and have all the residual diseases from the primary cancer removed. Only then can the krukenberg tumors be treated in an efficient manner. The effectiveness of resectioning through surgery is not well established. However, if the cancer is only limited to the ovaries, it can be safe as well as effective to resort to surgery. Although uncertain, radiotherapy and chemotherapy may also help in the treatment.

Patients suffering from Krukenberg tumor have a very poor survival rate. In most of the cases, the patients died within two years. The average life expectancy is considered to be 14 months. The diagnosis, as well as the initial treatments, seems to have an impact on the prognosis and also go on to affect the rate of survival. The metastasis of the primary tumor can lead to poor prognosis while the prognosis tends to get even worse if the tumor remains undiagnosed.

Since krukenberg tumors can have various origins, it is very important to opt for the right treatment plan in order to increase the survival rate. Removing the primary carcinoma followed by surgery on the tumor can increase the rate of survival as compared to a simultaneous surgery of the both. Ovarian metastases through gastric carcinoma are more complicated and severe as compared to colorectal and breast carcinoma.