Despite its frightening name, a sebaceous cyst is neither dangerous nor cancerous. In fact, it is only a bump or a lump that grows under the skin. It usually appears on the neck, face, upper chest, and upper back but it can be found in other areas of the body too. The only areas where a cyst cannot appear are the soles of the feet and the palms of the hands. Most of the time, it grows at a very slow rate and it isn’t painful. 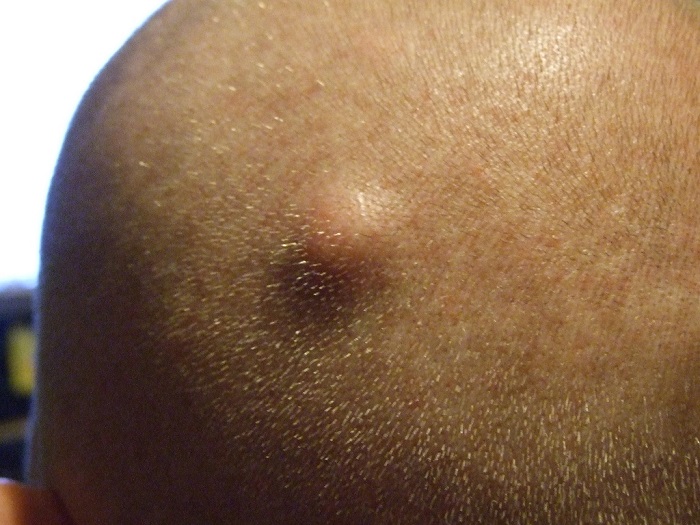 Still, there are some cases when a sebaceous cyst can become inflamed, red, infected, or can grow on an area with an already high risk of irritation, like the neck. It looks ugly, especially when it starts oozing out a white liquid with a foul smell and cheese-like consistency. The cyst can also become slightly hardened and its size varies from that of a pea to about 2 inches in diameter. In this article, we will discuss the most important aspects that you need to know about sebaceous cysts like their causes and the best treatments that you can try at home.

What Makes Sebaceous Cysts Appear on Your Skin?

Sebaceous cysts usually form at the base of hair follicles after one of them has swollen. They develop from blocked or damaged sebaceous glands, i.e. the glands that produce the oily substance (also known as sebum) that maintains the natural lubrication of the hair and skin. These are called “pilar cysts.”

These cysts can also appear when multiplying cells move inward instead of moving upward and shedding away like every other cell. These are called “epidermoid cysts.” The top layer of the skin is called the epidermis. In its outer layer, skin cells shed away. Underneath the epidermis lies the dermis.

These cysts’ foul smell comes from the keratin secreted by the cells in their walls. They can either be completely red or have a yellow tint which comes from the oily liquid underneath. It is worth noting that many experts consider sebaceous cysts hereditary. You can have such small cysts on your skin your entire life or they can suddenly pop up and either start growing or maintain the same size.

Sebaceous cysts are not cancerous or life-threatening in any way, so you shouldn’t start panicking if you notice one on your body. But while they may not be as dangerous as they look, they are surely visually unpleasant. Nobody likes living with a medium-sized bump on their skin and they don’t want anyone to accidentally touch it either.

Thankfully, there are plenty of remedies for sebaceous cysts even though most people do not even need one if the cyst doesn’t cause any issues. Still, if you want to just get rid of a sebaceous cyst in a natural way, you can check the Home Remedy Shop website for more info on sebaceous cyst home treatment options. There you will find the most popular home remedies like aloe vera, tea bags, clay tablets, baking soda, tree oil, and apple cider vinegar. But keep in mind that you should also keep an eye on any potential side-effects of such remedies and stop the treatment immediately!

What’s more, sebaceous cysts can appear in the wake of skin trauma, like a wound from a surgery, a scratch, or a skin condition like severe acne. You can also inherit them if you have a condition known as Gardner’s syndrome which is linked to certain skin growths including cysts. Usually, pilar cysts that are connected to the hairs on your head are the ones that people often inherit. In fact, the cyst can become painful if it’s located on a sensitive part of the body, like the scalp or the neck. They can be damaged by combs, brushes, or clothing and become inflamed.

In some cases, a cyst can become swollen but thankfully, there are many simple home treatments for skin cysts. The most important thing is to not squeeze or pop it no matter how tempting that may be. You can apply a moist and warm compress on the cyst, which should help it drain and heal. Also, you should always maintain it clean by washing it with a special, mild, antimicrobial soap.

It is extremely important not to cover your cyst with any kinds of cosmetic products! Never use foundation, concealer, or powder to conceal it! This will only make it more inflamed and finally, the cyst will become infected.

When your cyst is painful and becomes red and inflamed, it is time to go see a doctor. Only an expert will be able to tell whether the cyst is sebaceous or of any other type. In fact, this is the only kind of complication of a sebaceous cyst, and it happens when bacteria are involved. Make sure that you know all the details before visiting your doctor. For example, try to remember when you first noticed the cyst, if any recent skin injuries might have caused it, if had other cysts in the past, and if your family members have them too.

Your doctor may recommend ultrasounds to identify the type of the cyst or a CT scan to find any abnormalities in the sebaceous cyst. They might as well take a sample for a biopsy to see if it is cancerous. The doctor can decide to either drain it or inject it with steroid-based drugs, which usually decrease the swelling. They can also give you steroid pills or a topical cream meant to shrink the cyst.

Another important detail about sebaceous cysts is that they are not connected to anything else underneath the skin. So, the cyst and the skin around it can be gently moved. However, there are cases when the cyst is extremely stiff and cannot be moved at all. A sebaceous cyst can rarely extend deeper into the body and connect to other tissue. In such cases, the help of a doctor is needed immediately as things can become a lot more serious!

There are cases when a doctor will recommend surgery to have the cyst removed and this usually happens when it is a large one. If the cyst is in an area that is cosmetically challenging, doctors usually use laser to remove it. Experts may also choose to remove it if it stops the patient from normally performing everyday tasks. After the procedure, follow your doctor’s advice carefully and return for another visit. During the removal procedure, your doctor will:

Unfortunately, sebaceous cysts can sometimes become infected. Also, if they break or rupture, you will need professional assistance to treat the infection which can spread under the skin. A doctor will usually lance and drain it and instruct the patient to follow up with antibiotics. Even though such complications are rare, never try to drain a sebaceous cyst yourself! A home environment is never as sterile as a doctor’s office and your cyst can become even more infected.

After treating a cyst, analyze your skin frequently as cysts can reappear! This usually happens when the doctor has failed to completely remove it and parts of the sac wall have been left inside. Should this happen, you need to pay your doctor another visit to decide on the course of action. Usually, doctors will ask you to wait for about four weeks before surgically removing such a cyst. Keep in mind that the removal of a sebaceous cyst at a doctor’s office regardless of its size will always leave a small scar behind.

Preventing a Sebaceous Cyst from Appearing

You can always take preventative measures to avoid such cysts from appearing on your skin, especially if you know that people in your family have had them. Take care of your skin, clean it regularly, and keep it moisturized. Also, be careful when shaving off any unwanted body hair as this is among the most common causes of pilar cysts.

All in all, sebaceous cysts are not extremely dangerous, but they shouldn’t be ignored either. At the first sight of an abnormality on your skin, go see a doctor! Treating such cysts very early decreases the chances of an infection or other complications. Cysts can always reappear, so it is advised to remain vigilant.

Sebaceous cysts are a common skin issue for many people so if you spot one on your skin, don’t panic as there are plenty of home remedies to try. Our skin is the largest organ of the human body and acts as a protective barrier against harmful microorganisms or irritants. And while this barrier is tough enough to keep our internal parts together, it is paradoxically also very fragile and can be easily affected by many skin issues like cysts, acne, rashes, or breakouts.