Irrespective of whether you are taking over-the-counter or prescription medicine, it is always important to know the full side effects of the medicine. To be on the safe side, it is better to discuss all your medical conditions, lifestyle and medical history of the family with your physician before you start taking medicines. You should be even more careful if you are using other medical drugs and have an alcohol addiction. 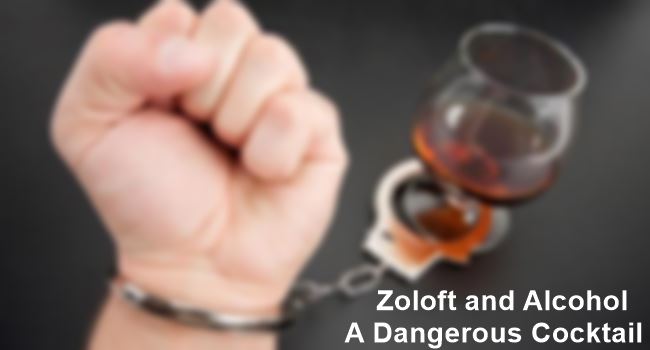 Zoloft is nothing but the brand name given to the generic drug sertraline. It is an antidepressant and tends to be highly effective in treating major depressive disorders. It belongs to the category of antidepressants that are known as SSRIs or selective serotonin reuptake inhibitors. The drug works by controlling the level of serotonin, a neurotransmitter present in the brain. Zoloft is one of the most commonly prescribed antidepressants and supposedly the one which tends to have a lesser amount of side effects as compared to other pharmaceutical antidepressants. Zoloft is not only used for the treatment of depression, but also other disorders such as OCD and PTSD.

Zoloft is most commonly prescribed for alleviating the following conditions:

While prescribing Zoloft, doctors go through your entire medical history to ensure that the risks do not outweigh the benefits. Zoloft has also been known to give rise to suicidal thoughts. However, among the adults beyond the age of 24, the risk if not believed to be so high. If you have had drug addictions, epilepsy, seizures, bipolar disorder or suicidal thoughts in the past, then it is important to notify the doctor regarding these things before you start taking the drug. Zoloft is also associated with some possible side effects, out of which the most common ones include dizziness, dry mouth, upset stomach, nausea, diarrhea, and sweating. If the side effects are severe, you will notice it in the form of weakness, easy bruising and bleeding, excessive weight loss and tremors.

Alcohol can have serious negative impacts on people suffering from depression and they are, therefore, recommended to stay away from alcohol as much as possible. Alcohol may seem to alleviate your problems for a short while. However, it has been seen that if you drink frequently, it only makes the condition worse. While depression is only an intense burst of sadness, alcohol can turn it into the following things:

The risks are even higher when you are taking prescription drugs for the treatment of depression.

Also Read: Using Zoloft for Anxiety? What You Should Know

Should you Drink Alcohol while on Zoloft?

Zoloft is known to magnify the same negative effects that are seen with excessive consumption of alcohol. Therefore, patients who are prescribed to Zoloft may have to change their entire lifestyle, especially if they are used to drinking alcohol on a frequent basis. The actual effect of combining Zoloft and alcohol tends to vary slightly from one patient to the other. However, the most common symptoms include dizziness, blackouts, limited mobility, slow thoughts and slow reaction time. Zoloft also lowers the ability of the patient to withstand alcohol while increasing the craving for the same. This leaves the patients more vulnerable to the negative side effects of alcohol than ever before.

The other reason why you should not drink alcohol while on Zoloft is that alcohol reduces the effectiveness of Zoloft. Hence, the drug is not able to monitor the serotonin levels in the brain as efficiently as it should. If continued for a long period, it could also result in a permanent decrease in serotonin level. With reduced effectiveness of the drug, the depressive symptoms tend to amplify leaving the patients more emotionally unstable. Therefore, it is very important that Zoloft is used only under the strict supervision of a doctor.

What Does Research Suggest?

A lot of research has been done to study Zoloft as an antidepressant. However, there has not been much research on the combined effects of Zoloft and alcohol so far. In a few studies that were conducted, the subjects who were given the drug did not suffer from depression. Out of these studies, one showed that the two did not affect each other while the other showed that mixing Zoloft and alcohol could increase the tendency for suicides, especially among young people. Due to relatively less research and unreliable evidence regarding the interaction of alcohol and Zoloft, much of the outcomes are studied from real life experiences rather than research.

Interactions of Zoloft with Alcohol

Zoloft is so commonly used that people using the drug are always at higher risk of mixing it with alcohol. However, the Food and Drugs Association strictly prohibits patients from combining the two. Both of these are substances that have a direct impact on the brain. Hence, when taken together, the negative side effects of both are magnified to a degree, which can lead to serious damage to the body. When you drink alcohol alone, it lowers the activity of the central nervous system and the brain, thereby reducing its ability to send and receive messages. However, if you take Zoloft together with alcohol, the neurotransmitters get affected too.

The most common side effects of mixing alcohol and Zoloft are blackouts, dizziness, depression, headache, nausea, anxiety, drowsiness, diarrhea and even suicidal thoughts. Many people have also reported experiencing a greater amount of intoxication with normal amounts of alcohol. This means that your judgment and coordination may be affected to a greater degree even when you feel that you have only consumed alcohol in otherwise safe quantities. The worst thing is that the side effects show up without warning, thereby putting you at a greater risk, especially if you are involved in tasks that require you to be physically active. Furthermore, mixing alcohol with Zoloft can lead to an interaction that amplifies the depressive symptoms, thereby leaving the drug entirely impotent. Mixing alcohol and Zoloft also increases the chances of you missing a dose which can eventually lead to even more complications.

Side Effects of Taking Zoloft with Alcohol

After drinking alcohol, you may experience a mood elevation for a short period. However, it also has a tendency to reduce the effectiveness of Zoloft, thereby making the symptoms of depression even worse.

Combining alcohol and Zoloft impairs your coordination, judgment, reaction time and skills. The effect is much worse as compared to drinking alcohol alone. You may even start feeling drowsy. Therefore, it is best advised not to participate in activities that require attention and focus.

People with depressive symptoms are naturally at a higher risk of addiction and substance abuse. In addition to this, it has also been revealed that Zoloft tends to activate the part of the brain known as insular cortex that is involved in the control of addiction. So if you have been experiencing difficulties in controlling your alcohol craving, it is best that you inform your doctor regarding the same, as soon as possible.

Most often, people with depressive symptoms resort to alcohol in helping them fall asleep. However, you may have trouble sleeping after the intoxication wears away, more so if you combine it with Zoloft.

Zoloft is a drug that alters the interaction of serotonin in the brain so as to give the desired results. However, this can also lead to a reduced sexual drive and even sexual dysfunction.

One of the theories suggests that Zoloft has a direct impact on the pancreas, which leads to a lowering of the blood sugar. This leads to an increased craving for alcohol as a way for the body to make up for its reduced blood sugar. This changes the serotonin balance, thereby causing mood fluctuations such as anxiety and anger.

A combination of alcohol and Zoloft is known to increase the risk of suicides, especially among adolescents. Therefore, holding regular consultations with a psychiatrist can be helpful while you are on Zoloft.

Zoloft is also known to lower the heart rate, thereby leading to a decrease in the blood pressure. The effects are more dangerous when you combine it with alcohol.

Other possible side effects of combining Zoloft and alcohol include:

Also Check:  Side Effects of Zoloft Without Alcohol

What do Doctors Suggest?

Doctors suggest you not to drink alcohol while you are on Zoloft. The combination can make you feel very drowsy, thereby affecting your productivity to a serious degree. This is not all. When taken together, alcohol and Zoloft tend to amplify the most negative side effects of each other there resulting in unpleasant and even dangerous complications. Depression patients are generally advised not to drink alcohol. However, if you are taking Zoloft, it changes into a strict no. If you are already taking Zoloft and still finding it rather difficult to control alcohol consumption, then it is best to consult your doctor as soon as you can.

Moderating Alcohol intake while on Zoloft

Before you start using Zoloft, your doctors will also have a lengthy discussion, informing you about all the things that are to be avoided, including alcohol. The general advice is not to drink alcohol while on Zoloft. However, if you cannot stick with this, the doctors may advise you to drink in moderation. But then again, moderation is not the same thing for all people. You should take the quantity of the drink, its alcohol content as well as your gender, age, weight and general health into consideration while determining what would be the moderate amount for you.

For women, moderation would mean one drink per day while for men, it is two drinks in a day. It should be noted that here, one drink refers to ten ounces of beer, half an ounce of eighty proof whiskey or five ounces of wine. If you are drinking 100% pure alcohol, then one ounce would be equivalent to one drink. In any case, the effects of alcohol in patients taking Zoloft are much greater when compared to an average person. So make sure that you are not alone during or after drinking alcohol. Also, it is best advised that you stay away from activities such as driving, swimming or operation of heavy machinery for the time being.

The company involved in the manufacturing and sale of Zoloft recommend their customers not to drink alcohol while using Zoloft. However, it is not in everyone’s nature to stick to the recommendations. So trying to educate yourself on the drugs that you are taking and their potential side effects can be greatly helpful. Since Zoloft is being used more and more, it is very important that patients become aware of what the drug can actually do to them. More researches are also being conducted to study the potential side effects of Zoloft and the potential interactions that can occur when taken with alcohol. It should be noted that a combination of Zoloft and alcohol not only gives side effects but can also result in serious withdrawal symptoms. Hence, the best advice is to steer clear of alcohol, at least while you are still on Zoloft.